The Ascend P7 is one of the latest flagship phones from Chinese telecom company Huawei. It is a large,

Ignore No More – The Perfect App For Parents?

What is it? Ignore No More is an android app that allows parents to remotely lock their children’s phones until

How posh! The Samsung Galaxy Alpha

The Look The Samsung Galaxy Alpha is Samsung’s first metal framed Smartphone. The thin frame (of 6.7mm) beats both the 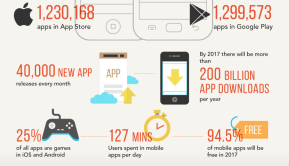 We created this infographic with some interesting facts and figures about the App World. With 1,230,168 apps in the Apple App
Back to Top ↑