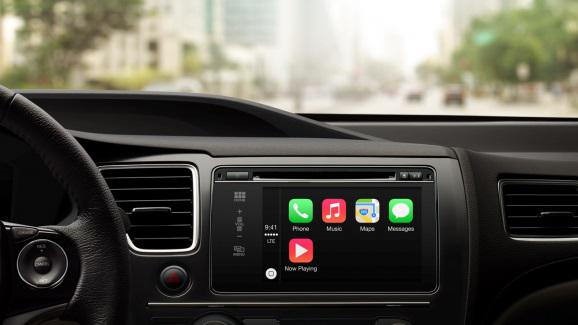 CarPlay is Apple’s latest attempt to take over our lives by providing a selection of some of the most popular iOS services within certain models of car. Originally called iOS in the Car, the service was announced in the summer of 2013 and allows “thunderbolt” iPhones (the 5, 5C, and 5S) to be synced with the user’s car for voice controlled services. Thankfully, CarPlay is supported by a wide range of car manufacturers – a full list is available below. Fully controllable by voice commands, the service provides a safe and simple system to use great iOS programs.

CarPlay provides a simple but useful range of iOS services on the road. Apple intends to keep on adding features to their latest gadget, but at the moment these are the main Apps available:

• iMessage – Siri can read out all messages, and can also compose responses through voice control and dictation.
• Satnav (satellite navigation), with display on the touch-screen interface.
• Music control, with support for the native ‘Music’ and Podcast Apps as well as third-party services like Spotify, Beats Music, and iHeartRadio.
• Hands-free phone services, allowing users to receive and make calls without even taking their eyes off the road.
• Siri’s “Eyes Free” mode, featuring voice control for quick and safe use.
• Stitcher – supporting on demand playback of over 25,000 shows, catering to a variety of interests.
• MLB At Bat, keeping the user up to date on their preferred Major League Baseball sides.

When the service was officially revealed to the public at the Geneva Motor Show, Apple boasted support for a wide range of vehicles. Though most providers promised CarPlay would be compatible with their cars by the end of 2014, Mercedes and Volvo revealed that the service would not run at full functionality until 2015. Thankfully, Pioneer and Alpine have both announced firmware updates which will allow some of their existing products to work with Apple’s latest service.
Future models of Ford, Audi, Jaguar, Peugeot, BMW and Toyota cars will all support the system, while Honda, Hyundai and Ferrari all already function with the software. For a full list of providers, check Apple’s website.

Android Apps Being Used on iPhone →