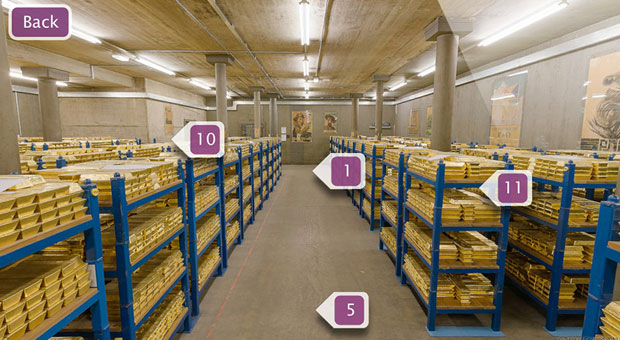 You don’t have money? But the Bank of England has some. Although they spent plenty to create an app now to show their wealth they are generous to give this app even away for free! Well it’s a free tour through the walls of the BANK OF ENGLAND. Pretty flawless 360 degree photographs show the main floors and rooms, enlightening texts explain the function and history of the bank. The user is able to freely move around in the photographs, clicking on interaction points for the descriptions. The most interesting thing of course is the gold vault. We learn about “gold” coming the old-english word “geolo” and that every gold bar is around 350 000 pounds. But how many do they have there? They won’t tell. There has never been a robbery, the text explains proudly. That’s probably why the BANK OF ENGLAND is so confident to put this app for iPhone and iPad out – to tease to the bad guys and show them the bling bling!

So it’s worth to have a look, the texts are very entertaining, imagine the Deutsche Bank mentioning films in which they got robbed! We would love to see more apps like this combining info and entertainment to share insights of governmental institutions.