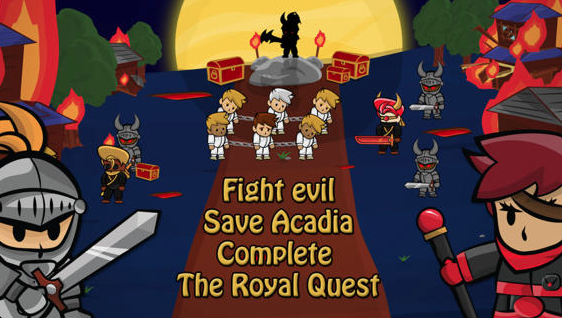 The Royal Quest is an action-packed RPG game that incorporates unique and engaging features that suit a wide range of ages and levels of skills.

This application aims to offer an enjoyable gaming experience to gamers around the world. The cartoonish graphics of the game is both simple and easy on the eyes. This type of graphics serves the fantasy-world genera of the game excellently.

The characters design is both simple and appealing; no over exaggerated details. The game also offers some memorable soundtracks and distinguishable sound effects to enhance the game experience.

After a long period of strife, the kingdom of Arcadia enjoyed three hundred blissful years of peace and tranquillity under the watchful eyes of the gallant Arcadian army. However, the luxuriated people of Arcadia were cruelly reminded of the meaning of dread upon the rebirth of the kingdom’s enemy, the dark lord Varn.

Shredded and torn apart, the kingdom wept helpless against the might of Varn and his fiendish minions. But when all hope seemed to be lost, two heroes emerged from the rubbles of despair, answering the kingdom’s pleads to purge this menace.

Sir Edward Redfort, the genius commander of the Arcadian army, and Gen, the vengeful young assassin, embark on a perilous journey, risking their own lives in order to purify the kingdom from this vile threat and to restore the lost peace that once engulfed Arcadia.

The game revolves around the concept of iconic language. The player can advance smoothly in the game without the need to read text at all. The merit of such approach is that it diminishes the language barrier, hence facilitating an enjoyable and less frustrating experience to players from around the world.

The inspiration for such approach came from the globally well-known traffic signs seen in every nation across the globe. The iconic nature of the game will lead the player through the game just like traffic signs would guide drivers of around the world.

In the royal quest, the player will guide the two protagonists, Edward and Gen, through the massive Kingdom of Arcadia. The player will venture in an open-world environment to complete various quests. Unlike any other action RPG games of the same nature, this game offers the freedom of movement across this vast area, allowing the player to move back and forth in between well-designed small villages and bigger regions of the map (Accessible by clicking the compass icon on the top right corner of the screen).

Most of these villages and regions are separated by locked gates. The keys for these gates can only be obtained as a quest reward or by looting treasure chests that are scattered across the world. The player can only progress from one region to the other by defeating a challenging boss that is blocking the passage to the next region.

To strengthen the heroes, the player can buy a variety of items and weapons from the different stores found in various spots on the map. While venturing across the kingdom, the player will engage in many battles with the dark lord’s minions.

However, minions that guards treasure chests will attack the heroes on sight regardless of the level difference. During the battle, the player can tactically guide the characters by selecting specific targets to attack.

Each character has weapon and personal skills that can be found as clickable icons at the top of the screen. Upon using any or both of the skills, the player needs to wait for the skill cool-down to use that skill again.

Therefore, the player must use these skills prudently to survive the relentless waves of minions. The characters’ health can be replenished by either using a healing potion (clicking on the red flask icon at the bottom of the screen), or by getting the last-hit on the minion which will grant some health points back.

This is another tactical aspect of the battle system that expands the array of choices offered to the player. Another item that can be used in battle is the blue crystal which will diminish the cool-down of the weapon and personal skills of the characters.

Boss battles are a lot more demanding than the regular battles, for a boss would use special skills similar to those used by the heroes. To add more challenge to the game, the players can test their skills in the battle arena which provides difficult adversaries wielding versatile strong weapons.

The players will be awarded generously with special weapon upon beating the arena.