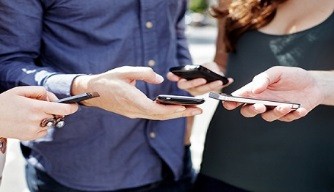 There are Many Increased Threats to Smart Phone Security

Users should be careful as more and more personal information is stored in their smartphone. In three consecutive months alone during last year, viruses and malware on Android devices rose 370%. This could be scary for those of us who use our smartphones as our lifelines. There are some common major threats to smartphone users.

• Be wary of fake apps that appear for purchase and download in both the Google Play Store and even the Apple App Store. The fake apps are disguised as regularly downloaded and trusted apps and are able to sneak into users’ phones and drain their accounts.
• Fake links are sent to smartphones through text messages and emails. Due to the fact that on a smaller screen it’s more difficult to examine a link before clicking, hackers are able to prey on users. When the link is clicked, passwords and credit card information is downloaded.
• Be careful when scanning a QR Code (Quick Response) with a smart phone’s camera.
• Stolen smartphones is a rising issue as our private photos, messages, and information, even business dealings, can make its way into the wrong hands.

The Risks for Android vs. Apple Phones

Both Android and Apple have the same risk level for getting a virus or having bank, credit card, or account information stolen. Apple has a higher level of security for apps attempting to be approved for the App Store, nonetheless, fake apps have been seen in both Apple and Android app stores. Google has recently improved security and made it harder to create an app for the Play Store. Users need to be smart and protect their smartphone with common sense and some anti-virus software.