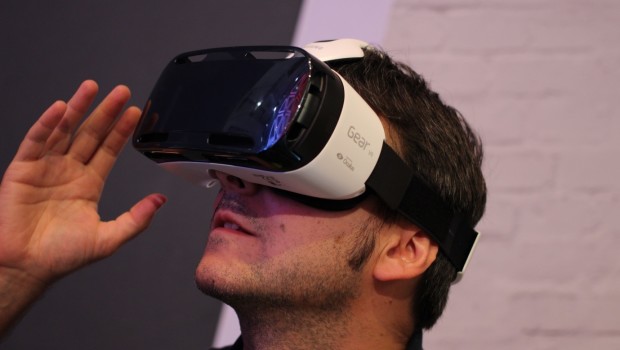 At IFA 2014 in Berlin this September Samsung unveiled the new Gear VR. The VR is, simply, a headset into which the new Samsung Galaxy Note 4 can be placed to act as a screen. It is the newest lower cost virtual reality headset which utilises a smartphone.

The Samsung Gear VR has a removable front cover in which the Samsung Galaxy Note 4 is placed in a micro USB port, making it into an interactive screen. There is a small dial on the top which adjusts the focus. It has soft cushioned straps designed to be as comfortable as possible on the head and face, the cushioning is also easily replaced. It has an accelerometer and a gyrometer for tracking head movement, however it only measures where the user is looking and not depth. It has a 96 degree field of view and a 60 Hz refresh rate, meaning lag is not much of a problem with the device. There are buttons on the side of the device which allow users to interact with games and simulations, for example in shooting games a click of one of these buttons fires the gun, laser or whatever the weapon of choice is.

As the Samsung Gear VR is only technically a headset most of the performance aspects come from the Galaxy Note 4. It comes with a 5.7 inch diameter Quad HD AMOLED display and has a 2560 x 1440 resolution with a pixel density of 515 PPI. This gives superior viewing from a smartphone. The Note 4 has a 16 megapixel back-facing camera which is used with the Samsung Gear VR for video pass-through, where the camera will show the wearer a live feed of what the camera can see. This is perfect for augmented reality apps as well as if the user wants to see what’s happening around them (in the real world) without taking the whole headset off. Audio also comes from the Note 4; it is 3D spatial sound and gives the effect of surround sound, coming in through both ears.

The Samsung Gear VR is available now for £149.99. However it does need to be paired with a Samsung Galaxy Note 4, and only a Note 4. Perfect for those who already have one, but not so much for those who don’t, with the Note 4 coming in at nearly £600.