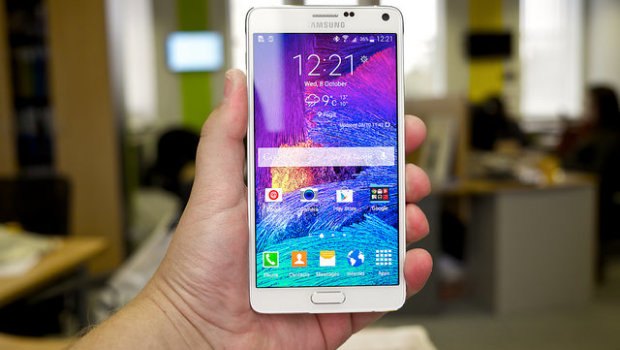 This October sees the launch of the new Samsung Galaxy Note 4. It is the next generation of Notes after the Note 3. Being a phablet (somewhere between a phone and a tablet) it is big, measuring 6.04 x 3.09 x 0.33 in. There is an option to shrink the screen so it can be used one-handed but for those with small palms this may not be achievable. Samsung have gone for a more premium feel, replacing some of the plastic of previous designs with metal. Also gone is the stitched effect on the back, which is replaced by a faux textured leather effect. One aspect which has been downgraded is water resistance; this Note is not at all waterproof, however this may not be a deal breaker for those who don’t live underwater.

The Samsung Galaxy Note 4 comes with a 5.7 inch diameter Quad HD AMOLED display. It has a 2560 x 1440 resolution and packs in a pixel density of 515 PPI. Alongside this it has two cameras, a 16 megapixel back-facing camera and a 3.7 megapixel front-facing camera. It has optical image stabilisation (OIS) and night mode for low light to help the user take better pictures and videos. 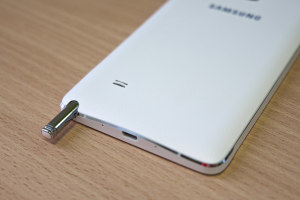 The phablet comes with the new improved S-pen, it now has an extra 1000 levels of sensitivity and extra functions. It allows the user to highlight text and select multiple images using the side button. The S-pen fits neatly into the top of the smart phone, going inside the back case for extra security. As with the Note 3 it has a split screen mode so users can resize two app windows for use simultaneously. It has new additions such as finger print scanning and heart rate monitor.

The Samsung Galaxy Note 4 runs on Android KitKat 4.4.4 and has Samsung’s custom TouchWiz layer. It comes with 3 GB of RAM and 32 GB internal memory as well as taking micro SD cards up to 128 GB. One of the most practical improvements on the Samsung Note 4 is the battery life. It now charges from 0% to 50% in 30 minutes, almost twice as fast as other phones, and the battery lasts for longer than ever before.