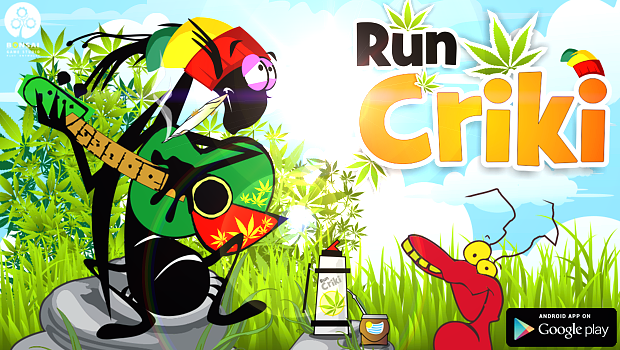 A new platform game makes the round: Run Criki from Bonsai Game Studio “celebrates” the legalization of marijuana in Uruguay.

Not only in the soccer world championships Uruguay is good for a surprise. The state with a population of 3,3 mil. is the first in the world who regulates the consumption and sale of marijuana in August 2014. Now the Montevideo based Bonsai Games Studio launched the Android app Run Criki: The weed lover Criki has to avoid all the obstacles in his way to get back home, while enjoying the magical brownies, weed, hashish and other “good stuff” he encounters.

7 Questions for Ramiro Simon, the director of Bonsai GameStudio

Recently Uruguay has become the first country in the world to make it legal to grow, sell and consume marijuana – what´s about your game?

The legalization is very important for Uruguay and also for the entire world because lot of countries that are planning to legalize are seeing what are the consequences that this brings to Uruguay. With the legalization of cannabis in this country we noticed that lot of people were pessimistic about that, so we decided to create this game to promote the news around the world in a fun and optimistic way to change the bad idea that lot of people has about cannabis.

I have been to Netherlands before and of course I ate magical brownies and smoke some weed when I was there – haha – but I am not an frequent consumer, I smoke every once in a while.

Usually you code iOS Games also. Is there a reason why this game is only for Android devices?

Apple has rejected us because our game has drug and alcohol content. I think it is so unfair that a game of killing, beating and mistreating people can be accepted and a funny game about a sympathetic cricket that collects and smokes marijuana is banned, because of “drug content”.

Are you involved in other trouble because of “the content”?

The majority of the people are very happy with our game, they really love it and laugh a lot with the cricket! Others minds, more conservatives, are not agree with the idea behind the game, but it is a small percentage.

Talking about our company:

We are a small company of 4 people here in Montevideo, Uruguay. I am the director, the programmer and PR… so many roles, other guy made all the music and the rest are digital artists.

What do you think, is the Uruguay or the South American app market different form the North American and/or from Europe?

I think that the app marketing strategy are quite the same for every developer, I mean we try to make the game being a hit in North America and Europe because these are the countries that pay more (ads, in-app purchase, premium games). A good think about targeting South America is that the marketing prices are cheaper to promote games and achieve users (make the game known) but after that you have to point to first world countries.

Well, if I get high I always start laughing with silly things so I prefer no to touch code because it is more probably tho broke something instead of improving/repairing it hahaha.

Thank you and good look!

Run Criki is a funny platform game. But be carful, you can become addicted…