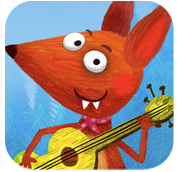 is a singalong app especially made for iPhone, iPad and Android Devices. Three scenes with well known songs and the musicstudio of the little fox are there to entertain your child from 2-5 years. What makes it special is not only again the stunning design by academy award nominee Heidi Wittlinger, it also has a great UI design and uses the same engine that nighty night! does. Everything can be moved and touched, more than 127 different pieces are animated. I know I sound like a fan, I actually produced this little piece of art and I am still convinced of it. I understand some critics saying that there should be more scenes but I can assure that creating even just one scene like this is very pricey and it has to be as consistent and perfectly animated as the existing ones are. To create this app our small studio

took a lot of risk, which luckily paid of. The music has been recorded by a film composer, so that the whole package is pretty seamless and of highest quality.

This app has been put out by us more than 1.5 years ago and as we can see it’s really tough to create such high quality apps for kids. Not much came out since then which really impressed us.

So of course I am very personal here, but I think this is one of the best apps for kids between 2-5 years out there.

KNICKET says: One of the best apps for kids between 3 and 5 on iOS and Android! 9/10