Visa-Valtteri(visy) Pimiä and Evgeni Gordejev created the addictive Puzzle Division Cell, which we also reviewed a few days ago.

I was working as a mobile developer for multiple companies and game studios before, but Division Cell was an opportunity to found our own studio and concentrate on working on our own ideas.

How big is your team and how did you find it?

The core team is me and Evgeni and we’ve got a lot of help from The Audio Grill guys from the UK working on the music and sound of the game. Our friends helped with the release, animations, testing, you name it!

How is the app developer scene in Finland?

It’s bigger than movies here! Seriously, the game industry has absolutely exploded in the wake of Supercell, Rovio, Remedy, Grand Cru, Mountain Sheep, Cornfox Bros., etc. SLUSH is also the largest startup event in Northern Europe, which is very telling how big the whole “build your own business” especially in the IT sector is up here.

How did you get inspired to develop Division Cell?

Evgeni’s first prototypes really spoke to me visually, and they captured a very elegant minimalism even in the first few forms I got to play with. Extending the visual language of it into a realm of origami, Tangram and procedural digital art seemed like a natural way of giving it a workable yet aesthetically pleasing form.

What were the obstacles developing Division Cell and how long did it take?

1. Not enough free time 2. Not enough money to buy free time. Nonetheless, we managed to get it out in roughly nine months altogether. We did have a quite clear idea of what the game would be for a long time, and the final result doesn’t much stray from that vision.

How it feels to produce a game without conflicting views or monetary interests straying one off from the golden path that is the amalgamation of form and function. There were many steps along the way where we could have gone off and designed a bunch of questionable in-app purchase items etc. but we always maintained that people will want to pay for a quality premium app if you put in the effort and the polish required, so that the people buying the game will feel that they’re getting something for their money. I also learned that even a simple game can involve a surprising amount of sleepless nights poring over the code 😀

Just do it. Get it out there. Start simple, then keep aiming higher. If you get something out, that’s already a huge achievement most people can only dream of. When it’s out, people will give you feedback of your work and to me that’s always been the best catalyst to push the designs and keep thinking of great ideas for games and then execute those ideas.

I am going to be working on game prototype over the rest of the year called “Shapeur”. All I can say right now that it’s going to be fast and ruthless. The antithesis of Division Cell is gameplay tempo, I’d wager ;). Evgeni is working for Rovio, and whatever it is, I know he’s going to do a great job at it.

Finally, what app is most fascinating to you right now?

Supernauts, of course. I’ve been following the tech since the very inception and the guys working on it (many of who are my old coworkers from Mr. Goodliving) are amongst some of the best in the business. I’m looking forward to what the players can do with the sandbox world they’ve created. 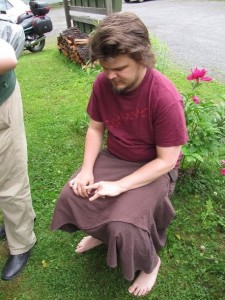 Run Criki And The Legalization Of Marijuana In Uruguay →

ACOMPLI Wants To Help You Combining Your iPhone Mail, Calendar, Contacts in One →