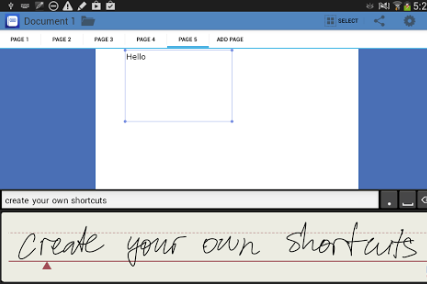 Even with tons of applications for iPhones, I always found one thing missing – an application that would allow me to create text documents in an easy way and share it on the go.

There had been many times when I had been out of my house and workplace and got a text asking for an urgent piece of information that I needed to write.

I had been searching for a good app that would allow me to create and send text documents in an easy way but to my bad luck, I have always been unsuccessful till the time I found WritePad.

WritePad – a text editor that has been specially designed for iPhone and iPad is a very nice utility app. It’s much more than just a text editor that would let you create and edit text documents. The app is loaded with a lot of features that I had not even expected of.

I have tried a lot of apps that use handwriting recognition but this has certainly been the best one of all of them. It recognizes PRINT, cursive and mix handwriting styles. The more I used this way to input text, the easier it became.

At last, I decided to feed myself with the reason behind this – the software of the app is designed in such a way that it adapts to your style of writing. Isn’t that amazing? You can easily switch between both the ways of entering text.

One surprise that I got was the “Shorthand” feature. Seriously, I bet you would have never expected this kind of feature. Neither did I. This provides a quick as well as an easy technique to insert the words that are often repeated.

You can also add new words to the already present shorthand dictionary in the app. Easy insertion of data is just one small feature of this app. Yes, you read that right. As I said, the app is loaded with some wonderful features.

Simple finger gestures can let you select the text and perform cut, copy, paste the text and insert special characters in it. You can easily modify the inbuilt user dictionary and auto corrector word list.

Using the hierarchal folder structure, you can easily organize all your folders. Here’s my favorite part – the app allows you to synchronize your documents with Evernote, Dropbox, Sky Drive, iTunes and icloud.

You can easily send your document as an attachment in an email or transfer the file to another iPhone or iPad within the same network. There’s a built in HTTP server for sending mails. And here’s what I needed the most in a text editor on my phone – a translator.

You can easily translate your text into languages like German, Swedish, Spanish, Italian, French etc. At last, when I think I have said much about this must have app for iPhone and iPad users, I must accept the fact that the developers of this app haven’t missed a single feature that might be needed by a person using an application like WritePad.

This has been the ultimate app in its niche.