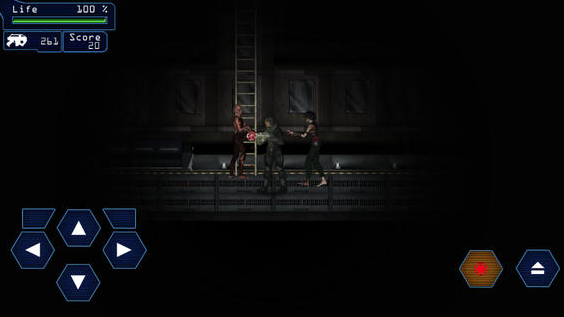 Soulless is an app for gamers who love horror, intense fighting, and shooting, scary character and fabulous graphical engineering, quality games play on iPhone, iPad and even in iPod touch.

When I was telling, most of the people would’ve realized that, Soulless is not for the kids’ below 12, it is for +12 and definitely not for the faint hearted I can tell it as I have experienced it.

The first and the foremost, I should appreciate the designers who developed the introductory image graphics of Soulless.

Broken glass wall protruded by an evil zombie face and our four bold Space marine characters standing with their guns before it… I estimated that many souls were being put into for creating Soulless. So coming to the other feature, Soulless is available and can be enjoyed, its entire game for just $5. 99; and who won’t buy this awesome game to experience its extravagances, but sadly if some miss to do it, I can tell that there is no hope in their soul… !

I bought it, and I played it… You know what.. ! I really didn’t want to indulge even to blink my eyes for even a microsecond while playing Soulless. In most of the stages, I got goose bumps and was extremely scary like I’m in hell…

I really satisfied with the experience playing all the space marine character in Soulless as it has 9 playable characters with its own unique specials and guns to play with. I enjoyed it in my iPad. The bigger the screen, the scarier it becomes, though you can enjoy the same thrill in any of your Apple devices, because of the spectacular graphic quality of Soulless.

I was really surprised about the size of the game, it is just 82. 6MB and of course it gets added while you are playing. As I said before, it is compatible with iPhone, iPad and iPod touch; so just download Soulless and enjoy the game as it requires iOS 5. 0 or later updated version.

As you will come to know that there are conversations between the team members while you are playing the game, and instructions on how to find the survivors in the dead planet? Which all to kill? Where to go?

In some places where you can’t contact your team, so you have to take your own decision from the previous instructions. This is a big game which has a super storyline to it because it has 10 missions to complete, 21 stages to cross, and of course the Boss battles.

In Soulless, you have something awesome which you can share playing with your friends or I can say with your competitors (as Friends will become competitors to you after playing this game for sure… !) by analyzing the player’s performance ranking with individual survivor endings.

I always wanted to play a game which depicts the movie “Resident Evil”, I finally got Soulless. It’s full filled me more than of what I expected. So do experience the same… You will definitely, for sure, encounter the thrill, intense horror and fear inside you.

I advise you to make your soul stronger to face the Soulless. All the best to you…