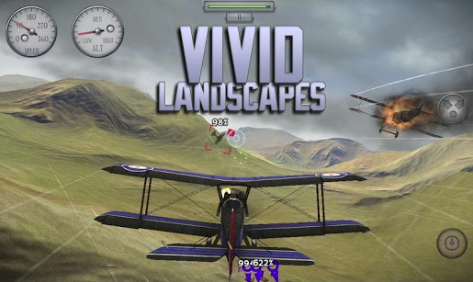 Sky Gamblers is an arcade World War I airplanes game involving different missions. Starting on the first mission the player will be expected to fly with a team on a crusade to destroy enemy fighters across rural areas and then over more urban built up areas.

As the game progresses the player will partake in a desert level. Here the player will be asked to tear through enemy fighters whilst bombing ground soldiers shortly before moving into a “Destroy the Depot” mission.

The immensity and different sections all contribute to the speed the plane can go which adds a believable sense of adventure to each mission the player partakes in. Duals also featured in the game will strengthen the sophistication of the flights.

In order to complete these the player must perform circular manoeuvres or jitter away from lock-on’s, turn around to gain the correct position whilst searching for the enemy.

One of the first things a player will want to do when starting to play Sky Gamblers is Air Supremacy through the tutor assignments. To be able to manage the plane is a simple procedure. The player just needs to tilt the phone in an upwards, downwards, left or right movement and this will make the plane go to the desired command. In addition to this there are some elevated controls which include the sweeping of the phone a couple of times which will enable the plane to carry out different actions such as coil manoeuvres and will in addition allow the plane the ability to come back faster.

The four alternative modes of command allow the player to decide on how simple or hard they would like play to be. There is also the choice of an onscreen joystick to use to direct the plane and an accelerator. In the case of more experienced players there is also option to use the two of these. There is the option to invert the Y axis within the settings but being a new player I found this quite difficult albeit enjoyable.

To accelerate or decelerate speed the player just has to press the screen of the phone forward movement. As well as the controls which have authority over the player’s plane, the player will be joined by fellow fighters whom the player can give direct commands to strike enemies or to safeguard the player and offer assistance.

The illustrations are of excellent quality as is the content and most certainly competes with computer games. In addition to the high quality appearance of the game play, the comic magazine type story board compete with real bespoke digital comic books. It is plain to see that the makers have put a lot of energy into making sure that all aspects of the app come across as amazing. Not only are the illustrations contained within the game fantastic but the game play itself is incredible too. Once the player has opted for a formula of plays suitable to their needs, it only takes a couple of assignments and the player will be addicted. Once the player has become established in the game play they will find that they are then in it until the end!

If the crusade does not appeal to some players then there is alternatively a mass of bonus levels to be investigated. Team Death Match, Bomb the Base and several survival modes are ready to be played from the start. These can be played online too and the element is strong. As of yet I have not stumbled across any lagging and the matchmaking is brilliant.

The battles which take place during the missions are based on how many bullets can be released whilst doing various difficult tasks such as, for example, having the plane the wrong way round but with the throttle up. The entire experience of the game comes across at a lightening speed pace which is fabulous.

To put it in layman terms, this game is nothing short of fantastic. I personally have paid double the amount as much money for games in the past which, in my opinion, can not even touch this game.