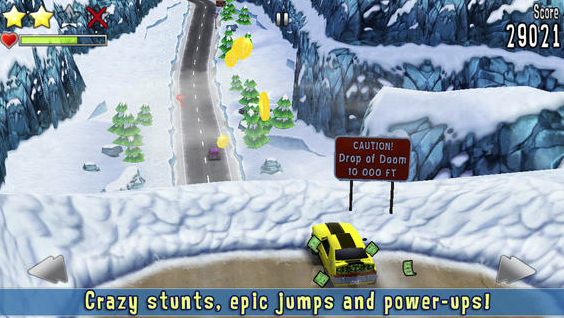 The story of the game is simple , there are 4 different worlds, and you have 4 levels of scenarios in each world to make your escape. You drive a car and try to avoid and run police off the road, collect stars, run other cars off the road, perform stuns and so on.

Game is not about winning a race like in Need for Speed, but instead participating in a serious of gateways from the police. This game was developed by Pixelbyte and published by Polarbit.

You drive a car and try to avoid and run police off the road, collect stars, run other cars off the road, perform stuns and so on. The goal is to get as many stars as possible because the stars are the only way that you unlock the other world later in the game.

The physics is really great, game is fun, and addicting, and it is really hard to put the game down.

It seems to really follow fun formula so lets take a look at it and see is it one thats worth your money and time. This is a single player game and no multiplayer but there is gamecenter enabled so you can see how you rank against players in the world.

I can tell you that this game is fun, challenging and addicting and I had  a really hard time putting it down. The physics of this game are great, from explosions, to running cars of the road, to making jumps and using powerups. It’s all a lot of fun. You can play the same level 15 times and have a different experience each time and its all fun. Your car has a damage meter that regenerates on its own.

The controls of the game work great, you have two options, tilt based or button based. The tilt controls work fine, but to get really serious and accurate I highly reccomend the buttons especially on the iPad version. The buttons are well placed, the controls respond well and work well with the physics of the game.

Graphically this game has a bright style, great amount of colors, there is a lot of nice explosions, it looks beautiful, and it compliments the game well. In conclusion I was really pleased with the Reckless Getaway.

Pixelbit took a simple concept of cops and robbers, added progression through worlds, and combine that with fun physics of the top down racing field. All this makes Reckless Getaway a title worth picking up. I would like to see multiplayer mode of some kind, but even without multiplayer this game is challenging with enough content to keep you busy for some time. It is rumour that downloadable content will be added on regular basis so there would be nice to have more levels in the future.

In all and all, I reccommend Reckless Getaway. The game is fun, the controls are good and its just a blast to play. You won’t be dissapointed.