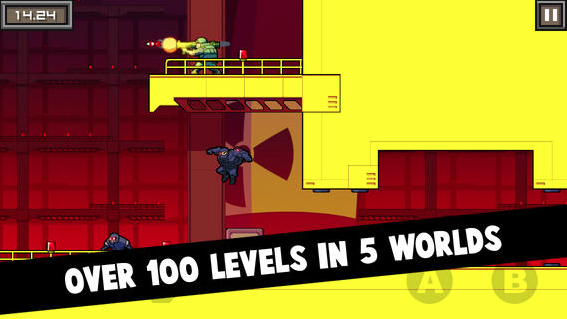 One could definitely say that video games have evolved over the last decades, as new technologies and new trends have come to the forefront of the scene. Things come and things go.

One of the types of games that have all but disappeared from the main score of released games is the platformer. Thankfully, due to the iPhones quick rise in gaming popularity, they are making somewhat of a comeback.

League of Evil 2 is the sequel to the popular IOS platformer and the basic formula for the game hasn’t changed much from that of its predecessor.

The game still includes jumping and dodging your way through crazy dangerous levels so that you can knock a scientist square in the face.

It brings back the old quick reflex and memorization combination, as the Agent, you have to stop the League of Evil, and they will be your main weapons in this fight.

There are five distinctive environments in League of Evil 2, and combined there are more than one hundred levels for you to play through. There’s a distinct difficulty curve for most of the game, which is always good, and the environments each have a different look, and they have different music playing which helps identify the change of difficulty. Another added bonus is that your characters costume changes with every environment as well. In each level there are multiple tasks for you to complete. The main goal is to find the scientist in each level and eliminate them. There are some secondary goals however, such as finding the briefcase that’s hidden in each level, and completing the level in the fastest time possible. The faster you complete the levels the more stars you earn for it, giving the levels a sense of replay ability in an effort to get more stars.

League of Evil 2 has quite a bit in common with its predecessor, but you will find that quite a bit of the game has been updated as well. One of the major changes to this game would definitely be the graphics. They have gone from old school pixel art graphics to more modern hand drawn animations, and they make quite the difference. The style of music has been upgraded as well, with tunes that fit into each of the five different environments they are present in. They updated some of the physics and enemy technique from the first game, but what’s important is that they kept the same style of gameplay which is what made the game so successful.

Because it enables you to replay each level once completed with some sort of objective the game gives you quite a bit of bang for your buck. There’s enough content to go on for days, and it makes the game a great addition to the franchise. It’s a hugely entertaining game that saw updates to all the places that where needed, and all the gameplay functionality kept where it should be, ultimately making it a must play for anyone.