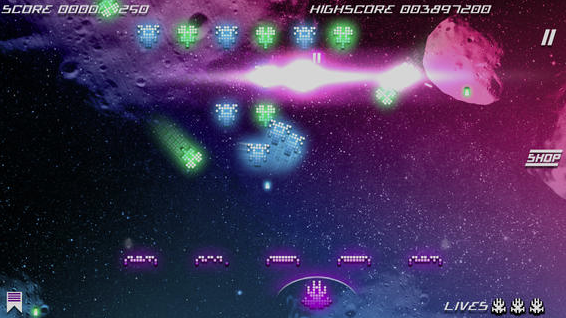 On Broadway, when an old show is restaged, it is called a ‘Revival’ as Hedwig and the Angry Inch or Of Mice and Men.

What does one call a reworking of a classic video game; a video game that arguably did much to influence the video game industry and gaming during the late 1970’s through 80’s?

Whatever term we eventually settle upon, Kosmic Revenge by ‘Real Tech VR, fits that description.

That is what this well-crafted app is, a re-introduction of the great, 1978 video arcade game, Space Invaders as conceived by the brilliant Tomohiro Nishikado and with a touch of the 1979 video arcade game, Asteroids thrown in for a double dose of nostalgia and entertainment. The major difference I noticed was that when shooting at the ‘aliens’ and I would hit my own fortifications during the fury of battle, there was no damage to my barriers unlike the original game where one could destroy all of one’s protection.

The aliens are more aggressive than the original game and come swooping in while firing at your defenses before they fall into rank-n-file. If you are able to discern their staging area—they tend to swoop into one small piece of real estate before properly deploying–you can rid yourself of a lot of the menaces before serious battle can commence. You can earn bonuses that will extend your lives, or give you more fire power, or better shields by gathering jewels and bonus ‘pods’.

After two waves of aliens, the intrepid space vehicle is thrown headlong into an asteroid field which it must traverse unscathed while gathering more jewels that are redeemable at the ‘shop’ for various defensive/offensive improvements. Shooting the larger asteroids will yield the precious jewels for you to gather. At any point in the game, if you have enough jewels, you can interrupt it by pushing the ‘SHOP’ icon to buy upgrades. If, for any reason, the ship is destroyed, your screen looks like a cracked windshield which I think is a great nuance to the game.

The sound effects manage well to convey the awesome destructiveness of your mighty vehicle striving to survive midst the seemingly innumerable enemies that you must destroy to survive. The musical accompaniment lends itself to heightening the sense of peril and desperation you must be feeling faced with these implacable foes—lightheartedly. It works. The graphics are in keeping with the original game; they are clean, well rendered, and relatively primitive. One could almost call them the Art Naif of video arcade gaming which was so common at one time. I did say there is a sense of nostalgia if not sentimentality to this app.

After you have cleared the asteroid field, you have the ‘bosses’ with which to contend; these entities are large, unpredictable groupings of vehicles intent on your destruction. In total, the game has eight waves with five stages each of ever increasingly difficult modes of lethality.

One other feature, which did not exist back in pre-history, i.e. the 1970’s, is the ability to track and compare with friends, or anybody, on Facebook. All in all, I found this game highly entertaining and found it difficult to tear myself away from it long enough to write this review. I am at the end of this review and can return now to a mission far more compelling: Kosmik revenge! Beware Aliens! I return!