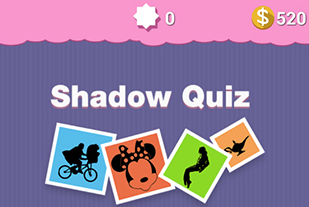 Guess the Shadow Quiz! If you can identify a shadow and find the puzzle, then Guess the Shadow Quiz is a spectacular game for you. All the characters which shadowed in the game are from movies, TV, famous personalities, country’s monuments, etc. are one of the main features of all the levels of this game.

But the intensity of the game grows by slowly increasing skill level when each level passes when the gamer continues winning the game.

Guess the Shadow Quiz is such a game that is not only for kids, but for all age group gamers who like to play brain puzzles.

Just the same way, me and my brother are the biggest fans of most of the classic and the modern puzzle games, but when I saw my brother who is studying in 8th standard playing some game when relaxing in the couch, he was usually started annoying me asking stupid and unrelated questions abruptly, which continued for almost thirty minutes.

I was entirely irritated by him, and went to see him to know the reason behind that… I saw him playing Guess the Shadow Quiz. Then the next move was, I forgot about my college work and started playing it with him or may be competing with him.

When every level passed, our tension and the observer pattern increased. I and my younger brother usually won’t get along much. But this game made us to sit and think together, which made our parents to watch us in shock and in dismay. But that was no longer a big deal for us; we were completely immersed in the game.

It started as normal and easy as it is a piece of cake… We shared our wins in Facebook, introduced this game with our friends, and enjoyed this game just by mocking it. But when we started to cross the levels, we felt the tensions and faced the failures.

Guess the Shadow Quiz is such a game with fun, creativity, puzzle, and at the same time worthy game which has some useful end to it, but not like other games only named for it more features like spectacular graphics, enthusiastic music and no useful feature.

The concept and the features of this game are very simple, you just have to identify the shadowed figure or the character which showed on the screen by typing what the character shows using the jumbled words.

You have to win the entire shadowed figure to unlock the next level. Where as in each level there are 24 figures which need to be named exactly. Now I’m in the 7th level and my brother is on the 6th level.

A very addictive game, in which the developers add figures to get guessed by the gamers who play Guess the Shadow Quiz! My brother loves it.! And more than that, I am scoring more and leading the competition in my tablet more than him… So obviously, it is my favorite game too…! A fantastic game to enjoy and has no problem of being addictive.