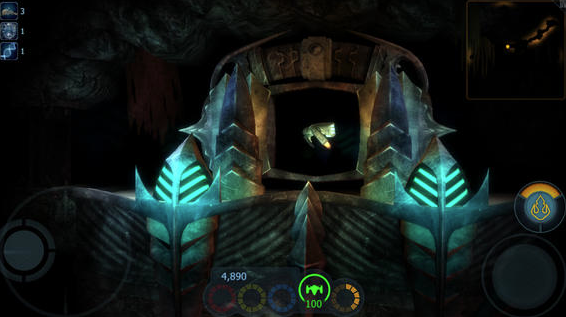 Gene effect is a game full of mysteries and surprises which you and your crew must attempt to reveal in this alien world. You must submerge yourself into the many far away tunnels where you will find an alien life form which whilst is unfriendly towards you it is very attractive.

Your role within the game is that of a captain who is in charge of a mining ship. It is your task to go on an expedition in search of another ship called the Goliath which went astray whilst investigating the planet of Kratoss.

During your mission through this archaic culture you will be expected to mine for additional energy supplies, try to unravel the mysteries of this alien community and try to find out what has happened to the team from the missing ship. Importantly you must all discover the huge mysteries which could conceivably alter the way of human life as we know it. You will also stumble across the relics of culture which is incredibly archaic and strong.

You must direct your ship around the small and unsteady caverns and try to find activate the technology you stumble across which has been left behind by this archaic community. You must endeavour to avoid the security which has also been left behind in addition to dodging the unwelcoming aliens. Basically the future and survival of human kind is on your head.

The ship which you have to navigate has a strong signal system and when it comes across a curious item or something which it considers it to be of some importance then it will set of an alarm which will result blue illustration being shown at the location of the item of interest. Your only arm is a T-Drone. You do not have many of these and they can be quite slow to charge and eventually shoot. The game seem tempting to you as a player on account of the desire to command the ship but in reality the commands are very slow and unpleasant to use. The controls available do not seem suitable for the actions which need to be performed which is quite frustrating particularly when you need to make a precise strategic move very promptly and are unable to do this. This is a regular occurrence.

There are additional tasks which may slow you down as you try to advance through the game. Your route is often bared by gates which you will need to unlock by discovering the correct opening mechanics which are hidden in the tunnels, by accumulating resources or by switching the lights on and off. These tasks by themselves are quite easy however on account of all the walls this is actually not the case.

Walls become a nuisance and the opposition. Whilst you are trying to get established and work out the mechanics of the game, these walls will constantly hinder your progress. If you crash into one for too long then your ship will explode. The commands have been created very well and has a joy stick option which can be used to command manoeuvres which should resolve the problem of crashing. Once you get used to the controls the game then introduces mines and vegetation that will through you into the walls if you are not on your guard.

Disregarding the fact that this game featured on a small screen, the abundance of bright lighting effects and attention to details gives off the realistic impression of the dark caverns and a powerful 3d effect.

It has been created to have a slow pace to it which includes a slumberous manoeuvre of the ship into the mines, but this is part and parcel of the game.

The stages are enormous and the story is very fascinating which creates quite an interesting combination. If you are a fan of sci-fi genre then Gene Effect is the game for you.