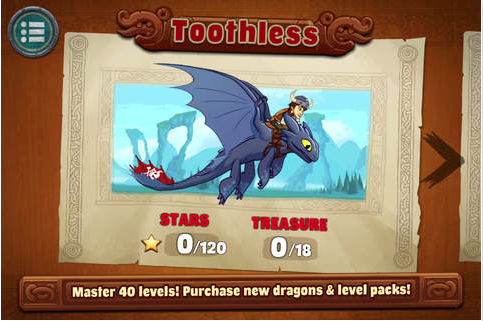 This game is a puzzler which features characters from a well known film. Unfortunately the information provided about this games content is not exactly true and differs a lot from what actually takes place.

The description states that severe weather has destroyed a Viking hamlet, but in fact the game is all about a statue which has been misplaced and upon landing caused a devastating blast which scared the farm animals causing them to run off into the wild.

It is therefore up to the hero Hiccup and his acquaintance to swap their Viking attire for that of cowboys and catch all of the animals. The levels start with a dragon which will release a cage in which you are to place all the captured animals.

Initially you have one control which is a roar, but as the game progresses you will gain extra abilities. The puzzles become more and more difficult as the game goes on.

Eventually, you will have the ability to breathe fire, butt barriers, collect and release large stones, shoot catapults and many more as you aim to reach your target.

Commanding the dragons is very easy to do and the list of controls are placed at the left of the screen and all the player has to do is move the desired icon to the place you want the motion to take place. The screen can also be rotated with a simple manoeuvre as long as it is not where your dragon is at the time and this will give you the opportunity to have a look around and find the most suitable area for them to perform an action.

You are provided with a variety of functions which the dragon is able to perform initially such as being able to roar, collect boulders, break items and set items alight. With these abilities the player has to use them to their advantage to attempt to make their way through the stages and collect the animals into the cage provided. It is not as easy as it sounds however as tasks need to be accomplished in a specific way or you will end up with unhappy animals all over the place.

The point system is revolved around a three tier scoring board. Points are given when each of these three tiers are accomplished. The first is finishing the stage, the second is collecting all the animals safely and the third is by doing all this in the least number of manoeuvres required. Whilst the content of the game is meant to be about a family film, the difficulty of the game does not reflect this and is in fact quite hard. It is certainly a challenging game with takes a certain amount of skill and strategy to clear the three tier system and gain the maximum amount of points. Also included in the game are bonus points which are placed in secret hiding places and upon finding any of these will unlock an extra level. However, if you decided to collect one of these bonus’s then you are not able to complete the three tier point system. It is one or the other.

As the game is created for children as well as adults it does start of easily so may take a while before it becomes difficult for the older player. As the game progresses it really does become something special. The animals are defenceless and you are expected to use this to your advantage. If however you do something wrong then you may set one of the animals on fire, or drop it or even accident let a larger scarier animal eat it. The graphics are so great that as a player you avoid any mistakes.

The developers of this game have taken great care and attention in creating it and lived up to their previous good reputation. The graphics are lovely and the stages are made impeccably well. If you are a fan of similar games of this genre then this is certainly worth a try. Even if you are not, you will still find the puzzles very entertaining.