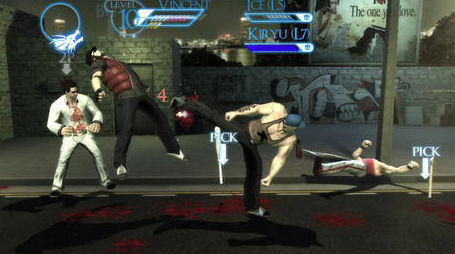 Brotherhood of Violence is a 3D fighting ‘brawler’ game, similar to classic arcade game like Final Fight or Double Dragon.

You are a former member of a Brotherhood, a gang of assassins and martial arts experts. Now the mysterious Big Boss, a dangerous man with incredible powers, kidnapped your Brother.

In a world with 30+ unique environments including more than 400 different stylized opponents from punks, ninja, yakuza, get lost in the story with amazing cinematic effects, awesome lighting and intricate detail as you fight to rescue your brother.

In addition of the ‘Story’ mode, the player can joint to daily challenges including ‘Survival’, ‘Battle Royale’ and ‘Hitman’ modes, there are many hours of play! There is a deep character customization, changes the costumes, face, complexion, weight, clothes, accessories and more.

In app purchases are available for greater customization of the game. The player can also learn different fighting techniques, customize the attacks, unlock more characters, and even play with friendly IA in order to help in your quest.

Finally, different ending in the game are possible, and a world leaderboard for each of the 3 difficulty modes are available. Using own 3D engine, developed for iOS since 2008, Brotherhood of Violence has the latest 3D effects like advanced post processing (Depth of Field), high frame rate (60 fps on iPhone 5), reflection, advanced rendering.

Using virtual DPAD with great freedom of control, or playing with iCade compatible controller, Brotherhood of Violence has great graphics and soundtrack, support iCloud save games, Game Center, Facebook and is available for iPhone, iPad (retina and iPhone 5 supported).

About realtech VR, realtech VR is a game development company with product solutions for the Apple iPhone and iPod touch and iPad devices since 2008, including successful games on App Store like Iron Fist Boxing and No Gravity.