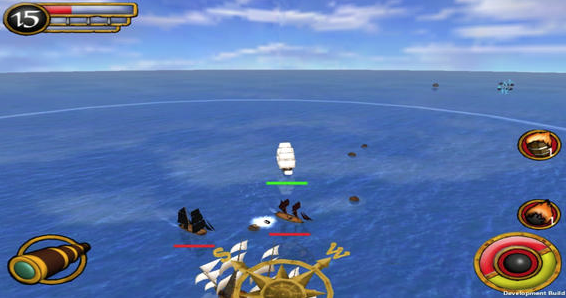 Many children often dream of being a pirate and it is a fantasy that as an adult we would still love to happen. The game somehow seems to make it appealing to be a crazy 17th Century criminal, and makes the job seem some what alluring.

The fact that this decision to be a criminal may lead to an untimely death at the gallows along with the decaying looks of a toothless monster whilst catching a nasty illness is soon forgotten.

The game content involves you on your pirate ship, travelling across the seven seas with a cargo full of booty. Once you get to your desired destination you can spend any money you have collected on the way to purchase new cannons to help you steal from more ships. This is not all the game involves however.

Whilst this game is not exactly perfect, it has many excellent qualities to make it worthwhile and provide a good pirate game.

You must also keep a constant watch for the enemy who sail by on other ships. So far this game sounds like an excellent pirate crusade which it is, however, there are also some points as to when it is not. All is not as simple as it sounds.

The story begins with you the playing being in control of the captain of one of the strongest ships but often find yourself ambushed by unknown enemies who want to sink you and your pirate ship.

If you fail to win that first fight, you are lifted from the sea by different pirates who want to know what has gone on. They provide you with a little help and then will send you on your fight to battle again and try and get back to the top of your game.

The game is quite stress free and you can try and conclude the adventures one at a time, or wait for a bit whilst you accumulate as much money as you can so you can buy a better pirate ship and fill it with as many cannons and weaponry as you can.

To control the ship you can tilt the phone or touch a wheel which is pictured on the screen. If you pres an empty area, this will fire your cannon. The environment is a collective of many small islands and you can dock your ship on any of this in between your travels on the oceans.

You will come across other ships on your adventures which are relatively safe and will not fire at you unless you fire at them first. Some however could be enemy ships and attack you straight away.

You guns fire by themselves so you job is to manoeuvre around and try and place yourself as best as you can. You must move backwards and forwards at all times to give yourself the best chance of firing correctly at your enemy and hitting them.

This game can be said to be a pirate sim. You will start with a relatively little ship and have to perform certain tasks in order to get a much stronger and larger ship. Any goods you accumulate on the way can be traded on the islands and you can spend y our money on new ships or improvements. The fighting is more typical arcade style. Extra health and bounty appears from destroyed ships and can be picked up by hand. It certainly keeps things interesting.

The game is jam packed full of fantastic happenings such as huge battles with enemy ships which are much bigger and stronger than yours and at times you can escape unscathed. However as much as you enjoy the game you will try and ignore the little hiccups which crop up.

Irrespective of the minor mistakes, if you like pirate adventures then this game is certainly for you.